The African woman whose legacy has changed my life: Wangari Maathai

Wangari was born in Kenya on April 1st, 1940, during British colonial rule. Her family was of Kikuyu origin, and her father was polygamous. As a child, Wangari, was given a small plot of land to grow her own food and to learn how to cultivate the land. She completed her primary and secondary education in Kenya. In 1960, she received a scholarship to commence her university studies in the United States of America, where she received a Bachelor’s and a Master’s degree in Biological Sciences. In April 1966, after returning to Kenya, Wangari met her future husband, Mwangi Mathai, a politician. The two got married in May 1969. 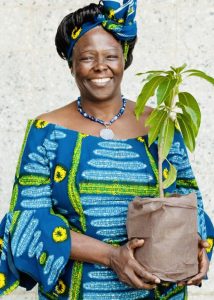 In 1977, Wangari and her husband got divorced. Soon after that, Wangari was imprisoned because she publically contested the judge’s ruling regarding her divorce.  As this ruling was in favour of her ex-husband and it shamed her for being a woman in need of a divorce. As a result, the judge ordered her to stop using her former husband’s last name.  In defiance of the judge, she changed the spelling of her last name, adding an “a” and becoming Wangari Maathai. That same year, she founded the Green Belt Movement. This grassroots environmental non-governmental organization planted over 30 million trees across Kenya over the next three decades. This movement became a successful platform for women’s empowerment (especially for rural women in Kenya). As a result, she became known as Africa’s Mother of Trees.

Wangari was imprisoned several times in the 1980s for criticizing Kenyan President Daniel Arap Moi and for demanding multi-party elections in Kenya.  She stood for environmental justice due to new construction developments that endangered the environment and indigenous peoples’ rights. Furthermore, in 1992, Maathai ran for president on a platform urging environmental protections. And at that time, she was the first African politician to embrace that cause publicly.  She withdrew from the elections but ran again in 1997.  In 2003, she founded the Mazingira Green Party of Kenya and later that year, she was appointed Assistant Minister for Environmental and Natural Resources by Kenyan President Mwai Kibaki. 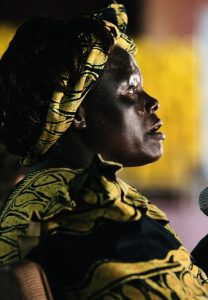 In 2004, Maathai won the Nobel Prize for her work in protecting the environment through political lobbying and reforestation initiatives. These initiatives were aimed at empowering rural women in Kenya. This was an outstanding award as it’s prestige helped put environmental rights on the map.

In 2006, she was one of the founders of the Nobel Women’s Initiative, an organization of six women recipients of the Nobel Prize, representing North and South America, Europe, the Middle East, and Africa, who united in their efforts to work for peace, justice, and equality throughout the world.  In January 2007, Maathai hosted the Global Young Greens conference in Nairobi, which some have described as a meeting of the next wave of the leadership of the world environmental movement.  In addition, Maathai wrote four books, including “The Greenbelt Movement: Sharing the Approach and the Experience”.

At 71, Wangari Maathai died from complications from ovarian cancer treatment at a Nairobi hospital.

But her legacy lives on!

Today millions of women like myself have gained inspiration from her story and aim to share this story with many people. Her passion, resilience and approach to environmental rights and gender equality contributed significantly to my career path. I am forever grateful!

When climate change impacts African women, it also affects me as an African woman

I want to make my husband happy, to honour his name, to give him a child

This a gentle reminder to step out of your comfort

Part of why we share stories and poems on SheEvolv

Poem 1: Desire The things I desire They interrog