My trans journey as an African francophone LGBTQIA activist

My Name is Latiyah. I am 26 years old and a feminist activist. I started working with ONG QET Inclusion, the first trans-related organization in the Ivory Coast, where I was the communication manager. At that time, I was very new to activism. I was 19 years old and had no idea what activism was. I had no idea what it was to fight for the rights of my community.

At that time, I was volunteering at the organization, and at the same time, I was transitioning. I was also navigating the general population by going to school. You know, this was a period with so much depression. I faced a lot of rejection at school because people were like, Uhm, are you a guy? Are you a girl? Who is this person in this classroom? There were many instances where one person would say; ‘We have seven girls in the classroom’. Another would say, ‘we have eight girls.’ Then the first person would respond by saying, ‘no, we have seven and a half girls in the classroom.’ And I was right there the whole time while this conversation was happening.

Because of such conversations, I just realized that these people calling themselves the general population needed to be educated about many things; they needed to understand what it was to be a trans person. I became more comprehensive. I realized that comprehension is the mother of acceptance. Because when you understand something, you are more likely to accept that this thing exists. These periods were challenging because I experienced a lot of depression. I was also in a period where I was rejecting myself, and it became really important for me to start my transition.

My family is very religious, and they were like something wrong was happening. They were convinced that there was an evil thing using my mind, that is, using my body to make me feel the way I felt. It was a lot to deal with at that time. I was like, I need the information to describe what I’m currently feeling. And this is one of the reasons why I joined the first organization. They were working on self-esteem, self-acceptance, and this kind of thing.

Working with them helped me become more confident. It helped me get to a point where I felt comfortable being a trans person. It was that comfort that allowed me to just became that person. There is no silence; there is no more accepting injustice. There is no more accepting oppression. And I started to share information because it’s also important to share my knowledge. The same way I share my experience within the trans community is the same way I share my experience with the general population. Because I am part of the general population. 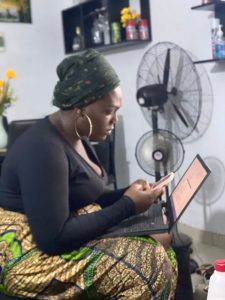 When I was more comfortable saying that I’m a trans person, one of my cousins discovered that I often dressed like a girl. She brought some of my pictures to my bigger brother, and they shared them with my mother. My mother called, ‘We just discovered some pictures, and I want to understand what they mean?’ And I was like, ‘Oh, you know, It’s not serious.’ I had a girl best friend who worked in cosmetics at this time. I explained that she had just tried to see if she could do makeup. So this is the reason why we took these pictures. And my cousins were like, ‘no, it is too well done for this to just be an exercise. ‘No, we need to have a serious conversation about these things, and we need to have a conversation where we can communicate freely.’ And I was like, ‘Okay, no problem.’

Because I had these periods of self-reflection, I was more comfortable with who I was and a bit more confrontable in saying that out loud. So, we had this conversation privately with my mom and two cousins. And they were like, ‘We want to understand what is happening?’ At first, I was like, ‘Nothing is happening.’ And my cousin said, ‘We see that you are changing; your face is changing, your body is changing. From your childhood you were alwasy acting like a girl. You sometimes think like a girl, but now it’s coming to the point of having a girl appearance. So it’s a lot of things, and we want to understand.’

And I was like, ‘Okay. So, you know, these past 3,4 years, I’ve been very depressed because I was trying to understand what is happening to myself. Thank God I finally discovered what was happening. It’s just that I define myself as a trans person. I’m currently in a situation where I need to transition because I’m uncomfortable being called son, sir or even brother. I’m not comfortable and I decided to keep it to myself and not say anything to anybody. But since you are asking the question, this is what is happening. I define myself as a girl. I never defined myself as a boy. So I’m in a situation where I am ashamed of being called a man. And this is why you are currently discovering some of the changes that I have made.

My mom said, ‘Okay, let us have this conversation because communication is very important. Let us ask questions, let us discuss, topics freely, comfortably.’ And I was like, ‘Okay, I’m ready for that because I have answers to give you. So if you want us to be communicating more, no more secrets. Let us go to the point of honest conversations. Sharing true information. And it was at that moment that my mom became my best friend.

I told her I didn’t need everybody to accept me as I was because it was enough that she had already accepted me. She feared that maybe I would become a sex worker and use drugs. Because I was working in an organization, I had the opportunity to meet with other people, with other trans girls that are sex workers. And I used to learn from their experience and what put them in that situation. So I explained to my mum that I knew some people like me who were doing sex work. But not just because they want to, but because their family rejects them and they don’t have anywhere to sleep. They don’t have anywhere to live. They don’t have anything to eat, and they don’t have access to employment. So what do you want them to do except look for money for survival? So if at this moment you are rejecting me and I’m on the streets, be sure that I will do sex work.’ And she was like, ‘Oh, no, no, no, no.’ I don’t want you to do sex work because you have enough with us. You don’t need to be in that kind of life.’

She said, ‘You are a trans person. How are you going to be your true self?’ And at that moment, we start talking about transitioning. And I started explaining what transition was, how it was possible to transition, and what kind of medication I was supposed to take. And my mom was like, ‘Okay, Now that I have all this information, I know how to explain myself in front of other people. So for me, it’s okay. But what I want you to do is to have a successful life. I don’t want people to talk about you as someone who failed in life. I want you to have success in everything you choose to do; I want you to succeed in your life. Because I know my family supports me and allows me to be comfortable speaking, giving my face, and giving my voice to my community. And since that moment. I came out in a certain way, my big brothers and me, and we became the very best of friends.

Understanding the situation is the mother of acceptance. It is the key to accepting a situation. This is the reason why I’m not looking for acceptance now. I want people to understand. Just listen and try to understand. When you understand, you will see that this is a human being’s experience, and nothing is offensive.

We need to know these stories. We need to know about their experiences. I questioned how I could position myself as a trans person. There are a lot of trans people who want to transition, and when transitioning, there is a moment when you are not matching the ID document you have. So when I faced this situation, I realized that I would have to justify myself. I would have to explain why they don’t look like the person in my ID document. And it is not fair for me, and it is not fair for my community. 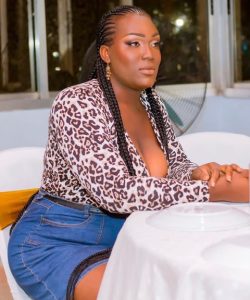 Because of this, I decided to create my organization in 2017 called Association Transgenres et Droits. For me, it is important to tell and to show people that, as trans people, we are proud to be trans. In addition, we have human rights, and because we have human rights, we are fighting for those rights. Currently, we are working on education and organizing a focus group around human rights. What are human rights? What are human rights systems, like the UN and the African systems? We educate our community on how to fight for their rights as trans people in an African context. How can we navigate through these different systems to make our voices heard? I am also on the board of the African Queer Youth Initiative. African Francophone LGBTQIA activists cannot always enter specific spaces because of English. For me, it is important to bring the experience and the stories of Franco queers from Western Africa to the broader African LGBTQIA community.

My work allows me to travel, enter different spaces, and share this information with others. I want to share what is important to my community. To deconstruct some things that have been presented. Education is very important. When you enter a room where you can make people think and think repeatedly, it’s not just fighting to fight. We need to stop looking for acceptance. We must make people aware and understand that it’s not a choice. We are living as we are as human beings.