My name is Sandra Mamai. I go by Sandy and Naf in some cases. How would I identify myself now that I’ve become aware of my status? I don’t really fit in most boxes. My pronouns are she or they, but I’m okay with whatever pronouns. Although I’m not very big on labels, I recognize the role all identities play in society today.

Minority gender identities face a lot of discrimination and not-so-good vibes from the rest of society. I’m a data analyst officer and see myself as a proactive and eccentric techie. I’m in the tech space professionally and out of passion. I strive to queer the tech ecosystem by breaking down barriers, creating spaces, and connecting communities to support and empower minority gender identities. To thrive together, not only in the world in general but also in whatever spaces they occupy.

The tech space is majorly male-dominated. Until recently, there’s not been a lot of flexibility in allowing women or minority gender identities to occupy a place or collaborate with the rest of the tech industry. So I want to come in and act like the bridge, to stand out and be counted and show other people that queer people can occupy this space. To demystify all the stereotypes that surround queer people. 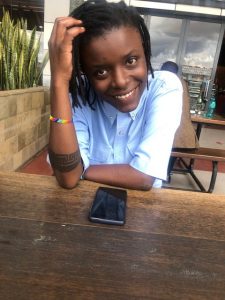 I’m championing to have inclusive applications. When I was filling in job applications, there was a place where they asked my gender, and I was limited to female or male. I want people to have flexibility in who they identify as and not be limited to just a binary construct of identifying people. And not having these constructs be used against a particular gender. So, jobs typically known for women, like nursing, customer assistant, or customer care, are not limited to women because people think it’s a woman’s job. I want men to occupy these spaces. I want to see men doing what is termed a woman’s job. And I want females to occupy male-dominated spaces, exercise their best selves, and thrive.

Growing up, I was a really outgoing kid. You know, I wasn’t a typical girl. I wasn’t primmed and composed, and all the things that society weirdly expects from people who identify as female. I wasn’t suppressed or shut down. My family were like, let her just be herself. This is how she is, you know? She likes being in trousers, climbing trees, and coming home with bruises. And I enjoyed it. I’m from a small town and didn’t have access to information that could inform me or help me learn who I was at that young age.

But growing into my teenage years, I went to an exclusive boarding high school, and that’s when shit started. I had never been to a girls’ school. It was like something I had never seen before. It was terrifying in that it was very strict and conservative. Almost like a Catholic school. Anything that was not Christian-like was frowned upon, including any close friendship between girls. There were cases of lesbians among us. As soon as you were suspected to be a lesbian, it was equivalent to immediate expulsion. 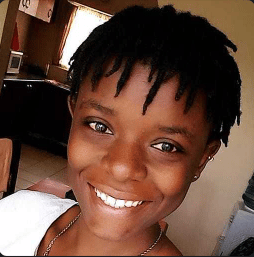 I went to a prestigious elitist school and was lucky to get in. There was no way I would miss out or lose a chance to study in that school just because I felt some way towards another girl. So it was a lot of suppressing parts of me. The outgoing, rebellious aspect of me was quickly suppressed. And not because anybody specifically silenced me. The environment I was in took everything of who I was and just put it in a bottle and threw it in the sea. It turned me into somebody I really could not recognize. When I left school, I was a very timid, quiet, modest girl who didn’t say much. That is something that was appreciated. I was this very good girl, you know? And inside, I was like, I’m not. I’ve lost almost every bit and piece of me. But society was now appreciative that I had grown up. I looked like a proper person in society, and I was like, this is some bullshit. So after high school, I decided to apply to a university as far from home as possible.

I went to university in the big city of Nairobi. And I came to meet myself again, but in this case, in a very different way. So there’s been ups and downs through that. But it’s how I came into the advocacy space because I was in an environment where there were opportunities to self-express and to just be yourself. On campus, I reconnected with bits and pieces of me that I really wanted, like the outgoingness, the curiosity, the rebel. I happened to find like-minded people. So I ended up coming out. I ended up understanding all these labels, all the terminology, what it means to be a lesbian, what it means to be a bisexual, and what it means to be a sexual person. And that’s the beginning of the amazing person I am today.

I find myself more masculine presenting. So you see me mostly in clothes or behaving in a way that’s considered masculine. I can’t say I’ve had it tough in the tech space compared to other stories I’ve heard about people identifying as women. They had to bend backwards to get an opportunity career-wise, a promotion, or a chance to showcase their talents. And it’s something that I have been pondering upon. Is it women who are masculine-presenting that have it easier? It’s something that really bugs me. I thought I had conquered the tech space, only to realize that it maybe because you show up to work in a shirt and you almost blend in. But I’m trying to get to that space where a lady can be the best programmer, where they can express themselves and show up to work as their best self without it being an issue.

I know when you enter the tech space or developer space, you have to turn down the feminine parts of you. You almost have to act like a bro. You have to laugh at some weird jokes that you don’t think are funny and are offensive. I don’t really appreciate that, and I don’t like it. It’s something that I want to demystify and champion to be removed. You cannot judge a developer, a hacker or somebody who’s in software or whatever based on how they’re presenting.

There is almost a glass ceiling when it comes to the tech space.

There’s a lot of doubt about your ability to do a good job, and it has nothing to do with your professional or general skills. It’s just that you’re a woman. Can you handle the pressure? I’m like, What do you mean? Can I handle the pressure? We are one of the genders that actually handle all the pressure. We are the ones that give birth. Do you know the pressure that comes with that? You can’t start doubting my ability to handle tough situations as if I was created in a cocoon. So, I want to demystify this from the male point of view, and I also want to empower women that show up. Show your skills, and celebrate each other. Don’t doubt your skills. Cos I know many people who are creating amazing things. Still, they have that overwhelming sense of imposter syndrome where they can’t bring themselves to showcase their work or to express themselves in terms of their skills. Cos they question, Oh, what will they think? Will these men respect me and my work? And I want that to be put on the table. 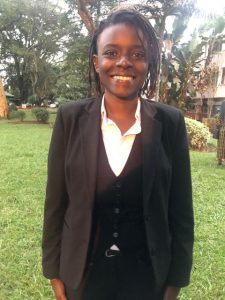 The corporate world is where I can thrive based on my personality and where I can move the needle. I want to empower people to see how they can incorporate modern technology into their day-to-day lives. Like artists, creators, and business people because tech is now globalized. There is always a way that we can incorporate tech in the littlest and in the most significant ways. I’m interested in blockchain technology because it aligns with activism and fighting for freedom. It’s like a decentralized system where we don’t need to depend on these structures or corporate figures that are siloing information, money, and opportunities. We are moving away from that place where to get information, you have to use Google, or for you to transact, you need to have a Visa card. We still have to teach and capacity build people to understand the importance of this technology and how it benefits them. I want people, especially queer people, to be the pioneers.

Sometimes, it exhausts me to take somebody back to pre-colonialism. When we had communities where women married women. I’m like, Why don’t you do your own research? Let’s normalize some of these things. I’m focusing on the corporate world and the tech space. Still, I’m with other activists and other people who are allies and championing the rights of people like us. I value the importance of inclusion and having everybody brought to the table. To have conversations where we normalize some of these things. We revisit and come up with facts rather than propaganda. I encourage people to empower each other and themselves. Recognizing our lived realities matter and sharing them helps inform the future and how we move forward.

Embracing the Other Woman