Noxolo Zungu says that Art is her therapy and forever Joy

For most young black girls living in remote rural and underdeveloped villages, dreams and goals seem arid and/or impossible to reach. I know that because I was once that young black girl whose dreams were clouded by the societal misconceptions of what a woman can and should be. Having a conversation with Noxolo felt like revisiting the long-buried memories of my childhood. A time when I had an irresistible burning desire to be heard, seen, and recognized for what I could offer the world. And for a moment, I wished someone had told me that I wasn&rsquor;t crazy for wanting to be more than what society had dictated for my life. Which is why sharing Noxolo&rsquor;s passion for art, an area predominantly known to be a “white man&rsquor;s field”, was an honour. This is how our conversation went:

MK: Briefly tell me about your upbringing, qualifications, aspirations and hobbies.

Noxolo: I am 22 years old. My grandmother raised me in Ntinini village, in KwaZulu-Natal. Later in 2016, I moved to Gauteng to complete grade 11 and 12 at Boitumelong Secondary School, located in Tembisa township (Sedibeng section). In 2018, I started my National Diploma in Food Technology at Tshwane University of Technology (TUT). Now, I am a quality intern at Kellogg&rsquor;s Springs Plant.

I do a lot of writing. I write short stories, poems and some of the poems have been published by Avbob poetry. I was also shortlisted in writing a children&rsquor;s anthology by Kwasukasukela books. And last year, I fell in love with painting and drawing.

My hobbies include acting, monologues, writing, painting, watching animation and comedy movies. My greatest aspiration is to bring change to the world through art. 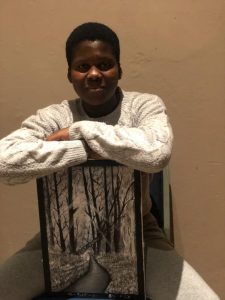 MK: At what age did the desire to create art through writing, painting, and drawing arise?

Noxolo: When I was nine years old, my mother passed away. Life became so hard because I started a new life with my grandma&rsquor;s family- my mom&rsquor;s aunt. I found it so hard to adapt and fit in at my grandma&rsquor;s place from the very start. One of the reasons that made it challenging to adapt was that no one really understood me because I was slightly introverted. My heart was constantly aching and bleeding because the scene of my mother&rsquor;s last days was stuck in my mind, and I had no courage to talk about it. So during those difficult times, pen and paper became my friends. At first, I used to write letters for my late mother. That is when I realized that writing was my healing process, making me feel happy.

I fell in love with poetry after reading the poetry anthology titled “Izinkwazi Zothukela” by M. Makhanya. I was intrigued by the nature of poems, and I got a lot of inspiration from that book. So, in 2017, I started to write poems. Over the years, I have been writing about hope and love. Fortunately, some of those poems have been published. I love poetry because it allows me to touch souls and hold the hands of the hopeless.

The idea of a painting came when I was building characters for my short story. In brief, the story narrates as follows: “There was this young widow named Grace. After her husband and her only child lost their lives in a horrific car accident, Grace was left swimming in the pool of tears, breathing pain, and there were absolutely no words that could make her feel better.” So from that, I asked myself, “what is it that can possibly make my protagonist “Grace” feel better?” And the answer that came to my mind was “paintings”. And instantly, I knew I had to try to execute this idea. 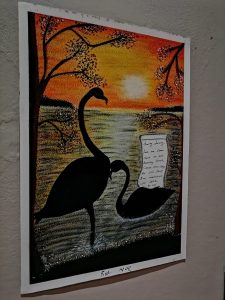 I chose painting because sometimes words aren&rsquor;t enough, but what we see is all that matters, and we can analyze or narrate our stories from what we see. So, when Grace glanced at the wall, she saw this painting that whispered in her ears. And suddenly, a smile appeared on her face. Well, that&rsquor;s how I started painting. Some of the paintings I&rsquor;ve done taught me that painting is not about perfection but the emotions it evokes when looking at it.

What did you do to overcome those challenges?

Noxolo: I have never been in a position where I felt like quitting because every single day, it&rsquor;s like a new fabric that I use to create stories. However, like anyone else, I have had challenges here and there. The major challenge is that I tend to jump from one story to another before finishing the previous one from a writer&rsquor;s perspective. Ironically, I know how to fix this problem, but I still repeatedly find myself hurdling the same situation.

At some point, I realized that my dream of having a successful novel on the market was probably a vague idea. So last year (2020), I decided to focus only on poetry and do the collection titled “The rainbow of feelings”. In the turn of events, I even transformed some of the pieces I never finished into free verse poems. And by God&rsquor;s Grace, I believe that I will finish it. 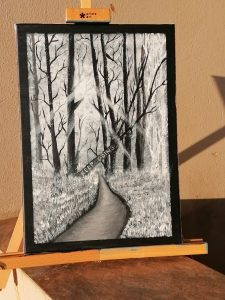 MK: Most often, it&rsquor;s either you draw and paint, or you write. It&rsquor;s rarely both. You are amongst the few artists who them simultaneously, and on the other hand, you still managed to pursue a career in food sciences. What&rsquor;s the trick?

Noxolo: That&rsquor;s a good question because food science is a busy industry, primarily where I work. However, if whatever you have on your plate makes you happy, it doesn&rsquor;t affect the scale. Art is my therapy and forever joy. Sometimes I thank God for it because it helps me ease the stress of work.

MK: Would you, at some point, consider creating art (through creative writing, painting and drawing) as a full-time career? Or is it something you want to keep as a side hobby/side-hustle?

Noxolo: No. I don&rsquor;t think I would be financially stable if I could consider art as a full-time career. It&rsquor;s better as a hobby/side-hustle.

MK: Most people see art as a risky and unstable career. What was the primary inspiration behind your vision to “create” from such a young age? But I guess you have answered it, or is there something you would want to add to that?

Noxolo: I totally agree. Art is a risky career. However, if you try to blend it with other things, the statement changes. That&rsquor;s what I want to do. At some point, I want to integrate art with food science. Part of my vision board includes a dream to start a coffee shop business with a unique touch of art in it. Depending on my customer&rsquor;s preferences, it won&rsquor;t be just a cup of coffee, but a cup of coffee topped with an original quote or an illustration.

MK: You have a creative mindset. Open-minded and goal-driven young individual. I love that about you. What message(s) would you say you are trying to translate through your art?

Noxolo: *All shall be well*.

It might not be today, but eventually, everything will fall into place. I want people to know that some things are beyond our control. Like when God has decided to agree with life&rsquor;s enemy, life has no choice but to come to an end. So, what can we say without saying goodbye?

Mostly, I want people to see a glimpse of hope through my work.

MK: When you hear the phrase “Start Now”, what is the first thing that comes to your mind?

Noxolo: There&rsquor;s no better time than now, and you&rsquor;ll never know your capabilities until you try. I know this because I wouldn&rsquor;t have ever known that I could paint if I didn&rsquor;t try.

MK: Last but not least, what does self-evolution mean to you?

Noxolo: To me, self-evolution is about being aware of your strengths and weaknesses. The corrective actions you take to improve yourself and to know what keeps you going.

I work as a writer and Facebook manager for SheEvolves.world. Amongst many other writing genres, I like book reviews, storytelling, sharing tips and tricks from tried experiences... I highly advocate for women’s health and well-being. ¿Questions? ¿Do you want to write us? Please go to our Contact page!

The power of gratitude

(Part 1/5) "For millions of people around the worl

A different message this Monday and a reminder tha